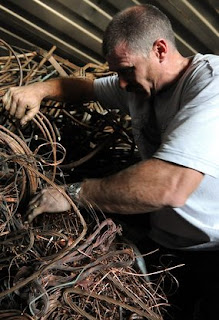 You'd think there would be a safer and easier way to steal money.

Kids do not try this at home.

JOURDANTON — The brutal story of Blake Higdon, the would-be Atascosa County copper thief who was maimed and disfigured by a 138,000-volt shock last year, has not slowed the theft of salvageable metals.

Higdon, then 24, was allegedly stealing copper wire from a utility pole off FM 476 west of Pleasanton in the early evening of Jan. 29, 2007, according to an Atascosa County Sheriff's report.

As Higdon tried to yank it free from the pole, it accidentally touched a hot wire, giving him a near-fatal shock, said chief deputy David Soward of the Atascosa County Sheriff's office.
Arriving deputies found Higdon on the ground, screaming in pain and with his clothes burned off, according to the police report. He was never charged with a crime because of his injuries.
“He ended up losing (his) kidneys over this, and his arms and legs had to be amputated,” Soward said.

Attempts to reach Higdon for comment were unsucessful. Officials in Atascosa and Wilson counties said a rise in arrests in connection with copper theft has followed rising prices for the metal over the past several years, with salvage copper now bringing $3 a pound or more.

The risky crime occurs all over the state, as evidenced by the Aug. 2 death of a Dallas man who was also suspected of trying to steal copper from a utility pole. James Buster McKay, 51, was shocked by a live wire, suffering third-degree burns over half of his body.

Copper thievery in South Texas has risen despite Higdon's tragic experience, Soward said. It's almost a weekly affair, he said, noting four arrests for the crime in July and three in June.
“It's something we've been dealing with about four years now, when the price of copper went up,” Soward said. Abandoned buildings are popular targets, he said, adding, “They've hit practically every cell phone tower in the county.”

Floresville Police Det. Chad Clark reported a similar incidence of copper thefts. The problem has been on the rise for two years, with some businesses being burglarized several times and some offenders repeatedly arrested, he said.

“There is a tie between drug use and selling copper,” Clark said. Air conditioning and radiator coils are particularly vulnerable, he said, as are cell phone towers.

Jourdanton Police Sgt. Eric Kaiser said the price of copper has reached $4 a pound in the past. Two scrap yards in south San Antonio reported buying copper last week for $2.62 to $2.80 a pound.

In Jourdanton, the demolition of a hospital was seen as an opportunity to cash in on scrap metal — police arrested three men at the site on Texas 97 on July 30 as they attempted to steal copper wiring, Kaiser said. Two previous attempts to steal plumbing and copper wire from the building were foiled after Jourdanton police intervened, Kaiser said.

The men arrested at the hospital were charged with theft, he said, but due to a change in the law applying to theft of metal wire that took effect Sept. 1, 2007, the charge is a state jail felony instead of a misdemeanor.
Posted by Sam at 6:04 AM