It is what it is 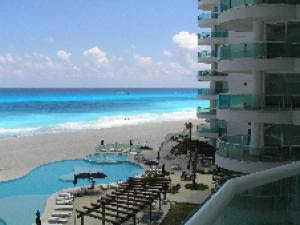 Another not ready for prime time politician?

Or someone with a legitimate complaint of a too nosy press and media?

I think the first.

Typically verbose councilwoman is silenced by Cancún question
Jaime Castillo - Jaime Castillo
In a little more than a year in office, City Councilwoman Diane Cibrian has earned a reputation as an aggressive and energetic advocate who seeks, not shrinks from, the media spotlight.
Since last Friday, however, the District 8 representative and mayoral hopeful has uncharacteristically refused to answer one direct question:
Shortly after being elected in a 2007 runoff, did she take a trip to Cancún, Mexico, and stay for free in the condominium of local real estate investor Hugo Gutierrez Jr.?
“You've crossed the line into my personal life,” she said in the only on-the-record portion of a more than hour-long meeting Friday. “I'm not answering that question. I'm done with this issue.”
A briefer telephone interview Monday was more of the same. “It is what it is. You're going to write whatever you want. I'm done with this issue.”
Whether or not a city councilwoman stayed in Gutierrez's condo in one of Mexico's hottest tourist destinations is, of course, a smell-test issue, especially if you consider that Gutierrez, at the time of the supposed trip, was fighting to keep the city from applying its tree ordinance to a property he owned in northwest Bexar County.
During the legal battle, which Gutierrez won, Councilwoman Cibrian on at least one occasion discussed the development, called West Pointe, with the city attorney's office.
When first asked about the situation for an Aug. 3 article by Express-News reporter John Tedesco, Cibrian said she had never heard of West Pointe and hadn't spoken with city staff about it. But she called later to say she did remember one brief chat with City Attorney Michael Bernard.
Cibrian's faulty memory, or outright obfuscation, has been a pattern throughout the Gutierrez issue.
Before and after Tedesco's article, Cibrian insisted that Gutierrez was a friend, but no more influential than any other contributor in her political sphere.
That position, however, doesn't square with information that has come to light in recent weeks.
In addition to the Cancún trip, Cibrian refused to answer questions about her choice for the city's influential zoning commission and her contention that she didn't know Wayne Benke, the rancher who leased Gutierrez's property for agricultural use and stripped the plot of much of its tree canopy.
Ramiro Valadez III, Cibrian's handpicked zoning representative, is a partner in four separate business ventures with Gutierrez, according to state records uncovered by Express-News reporter Greg Jefferson.
Regarding Benke and his family, Cibrian told Tedesco: “I don't know them. I've never been to their home. ... The only time I've heard the last name is connected to a monogram company.”
County Commissioner Sergio “Chico” Rodriguez, however, confirmed to me last Friday that he held a fundraiser at Benke's home last September and that Cibrian was in attendance.
The time for Cibrian to come clean has long passed.
As a councilwoman, she owes it to the community to divulge whether she accepted a condo stay from an influential real estate investor, who as recently as 2002 described himself as a developer and sought a $170 million tax subsidy from the city for West Pointe.
As a mayoral candidate, Cibrian has an obligation to voters to fully explain every one of her official decisions, and not to hide behind the cheap trick of “no comment.”
In words she would find familiar: It is what it is.
Posted by Sam at 6:21 AM