What would Lou Grant do? 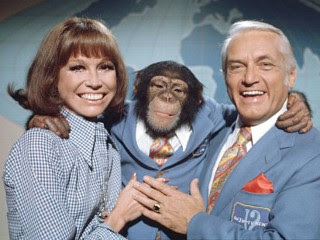 Man, this sounds more like something from the old Mary Tyler Moore show.

Without the canned laughter sound track of course.

Fired Philly TV anchor admits e-mail hacking
By MARYCLAIRE DALE, Associated Press Writer
PHILADELPHIA - A fired TV newscaster admitted in court Friday that he illegally hacked into his co-anchor's e-mail accounts and leaked private information about her to gossip columnists.
Larry Mendte admitted that he viewed hundreds of Alycia Lane's e-mails from March 2006 to May 2008, including ones from her agent, her then-husband and lawyers representing her after she was arrested in New York last year and fired from KYW-TV, Philadelphia's CBS affiliate.
"There is no question he wrecked her career," said lawyer Paul Rosen, who represents Lane in her wrongful-termination suit against the station.
Mendte, 51, said at a news conference that his actions grew out of a feud with Lane, 36, that began after he ended what he said was a flirtatious and improper relationship with her, including long dinners and late nights out together.
Rosen promptly disputed the account. He called Mendte "sick and narcissistic" and said there was never an inappropriate relationship.
Mendte, who is married to local Fox news anchor Dawn Stensland, accused Lane of undermining his standing at the station after the relationship ended, and said that with his career in trouble, he began looking at her e-mails.
"I was not the source of every story about Alycia Lane or the sole source on many, but I was a source, and I was getting some of the information from her e-mails," he said.
Mendte earned about $700,000 a year at the station. Rosen believes he became jealous of his younger co-anchor in early 2006 as her salary climbed to about $780,000. He bought a keystroke-logging device to get her passwords in August 2006, and intercepted e-mails from Lane's personal and work accounts, prosecutors said.
From January to May of this year, Mendte read Lane's e-mail 537 times, the FBI said.
Mendte and Lane co-anchored evening broadcasts together for four years at KYW until Lane's arrest in December after an alleged scuffle with New York police.
Mendte was fired in June after FBI agents searched his home and seized his computer. His attorney, Michael Schwartz, has said Mendte cooperated from the start.
Mendte faces a maximum possible sentence of five years in prison but is likely to get much less under federal guidelines when he is sentenced Nov. 24. Prosecutors have agreed not to recommend any sentence.
As the twice-divorced Lane's personal life became tabloid fodder, she complained to the station that her work e-mails were getting passed around, Rosen said.
"They treated her as if she was paranoid," he said.
The allegations are the latest embarrassment for the station, which had been making gains with the Mendte-Lane duo against longtime news leader WPVI-TV, the ABC affiliate.
According to the criminal information filed in July, Mendte relayed details about Lane's criminal case and other information to a Philadelphia Daily News reporter.
Lane is suing the station over her dismissal, which the station said was necessary because she had become the subject of several news stories.
New York prosecutors in February downgraded felony charges that Lane struck the officer. A judge pledged to drop the remaining charges in August if she is not arrested again.
Mendte joined KYW in July 2003 after several years at the local NBC affiliate. He previously co-hosted "Access Hollywood" and worked at stations in Chicago, San Diego and New York.
Posted by Sam at 7:53 AM