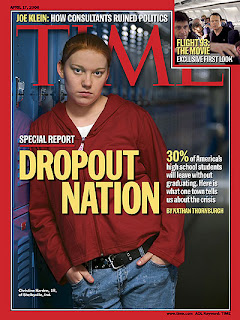 My thoughts are that staying in school and getting an education is a sure-fire low cost tool in crime fighting.

I'd like to see some stats but I'm willing to bet that high school grads get into less trouble than high school droputs, even thoose that later go back and get a GED.

Anti-dropout efforts aimed at four S.A. school districts
Eva Ruth Moravec - Express-News
After surveying 403 Hispanic families in Bexar County on their attitudes toward public schools and involvement in their children's educations, the Texas State Teachers Association determined that local Hispanic parents need to know why and how they can better encourage children to stay in school.
The survey last month was part of an effort to curb dropout rates, which the TSTA says are higher locally among Hispanic students. The agency has since initiated a four-week, $225,000 radio campaign and planned events with Edgewood, Harlandale, San Antonio and Southwest independent school districts.
On Saturday, about 100 parents and children attended the first event to come out of that effort — Edgewood's Community Back to School Kick Off event, featuring TSTA staff and its research. About 20 businesses, agencies and support services set up tables to present information to interested parents and hand out school supplies and other goodies.
“We all know how important parental involvement is,” said Edgewood Superintendent Liz Garza, “and our parents already do a lot. We just want to have more involved so that they can understand how important it is to their children.”
According to TSTA President Rita Haecker, the study showed that parents do recognize the value of their role in their child's education, but many fail to get involved. They can do so by talking to teachers, administrators and children and checking homework, she said.
About 51 percent of Hispanic parents surveyed help their children with homework every night, while 26 percent help a few nights a week and 12 percent don't offer any help at all.
“The data we have show Hispanic students have a disproportionate dropout rate,” said TSTA spokesman Joe Bean, “which is particularly worrisome because they are the fastest-growing ethnic group in Texas.”
Texas Education Agency data show that 77 percent of Hispanic students graduated high school after four years in 2005, compared with 82 percent of African-American students and 90 percent of white students.
According to TSTA data, over 29,000 Hispanic students in Texas dropped out last school year.
Recently, Mayor Phil Hardberger announced he will join community volunteers to knock on about 1,000 doors of at-risk students in one school district starting Sept. 6 as part of his “Reach Out to Drop Outs” initiative, underlining that he recognizes the importance of getting a high school diploma.
Alicia Aragon, who attended the Edgewood event and regularly volunteers at her son's school, Coronado-Escobar Elementary, understands the importance of her role as a parent is in her son's education.
“As a volunteer, you get to see a lot of things, and it does help with a student's success,” Aragon said. “My son loves for me to be there. He knows that I'm there for him and have an interest in him getting an education and a better life.”
Posted by Sam at 5:45 AM