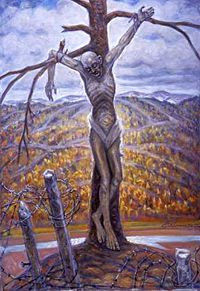 Mary Green is an excellent attorney. Go get 'em Mary.

Murder jury sees gruesome images of bleeding victim being bound
Graeme Zielinski - Express-News
The images of what were said to be Corey Baxter's bloody last hours were shown to Bexar County jurors Thursday as the murder trial of one of seven men initially charged in his 2007 killing resumed, grimly highlighted by testimony from a co-defendant who described a torture scene.
Brian Cyr, 35, whose trial began Tuesday in the 186th District Court, sat impassively through it all, his right arm at times slung over the back of his chair, as prosecutors showed 11 short video clips said to have been recovered from co-defendant Rudy Hettler's cell phone.
Cyr's lawyer, Lawrence Greenwood, objected to their admission and was overruled by Judge Maria Teresa Herr.
In one of the grainy clips, as an immobilized and bleeding Baxter was seen being bound on a garage floor, a voice alleged to be Cyr's did an ersatz Tony Montana impression, telling Baxter, as the Scarface character did, “Say hello to my little friend.”
In another clip, as what was said to be a discipline beating began, Cyr, nicknamed “Sushi,” was said to have been the voice that advised, “Never let 'em get you down.”
If the times and dates on the recovered images were to be believed, it was only hours later when Baxter's body was found in a grassy area on March 5, 2007, near Walzem and Gibbs-Sprawl roads, allegedly as a result of boasting to membership in the Texas Syndicate prison gang and giving information that led to the beating of another co-defendant's younger brother.
Those theories were introduced by Clifford Vansyckle, 30, who offered the jury a running commentary as the images were shown. Vansyckle, a hulking self-acknowledged methamphetamine abuser and drug enforcer, was initially charged in Baxter's murder and was offered lesser assault charges and consideration on a meth possession rap in exchange for his testimony against the six other defendants.
His testimony, the still images and video clips were prosecutors' attempts to show how the end came for the 28-year-old Baxter. Asked by Assistant District Attorney Mary Green “What brought everyone together?” Vansyckle had a one-word answer: “Dope.”
Vansyckle painted a picture of a shiftless lifestyle of petty theft and days-long crystal meth sprees, where “tweakers” would ride around in their parents' cars from party to party.
He testified that Baxter was targeted in part because he had boasted of being detailed by Hettler to “take out” Robert Cruz, one of the defendants.
The others charged with murder were Guadalupe Villarreal, Justin Berban Alvarado and Michael Yaws, all of whom are awaiting trial.
Vansyckle said the group initially intended to beat Baxter as they gathered in a garage at the home of a crew member's girlfriend in the 9600 block of Chelmsford Drive.
“I don't think any of us at first took it serious,” said Vansyckle, who claimed to have left as the beatings progressed.
Vansyckle said he returned to the house hours later, with a hamburger for Berban, and he could still make out Baxter's voice from within the garage: “He was saying, ‘Somebody help. Somebody help.'”
Posted by Sam at 5:47 AM