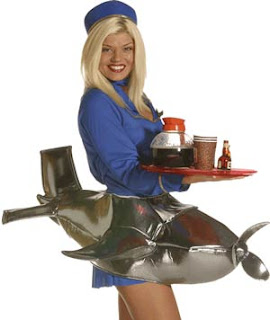 You know, I'm very curious about this. Why would the stewardess risk her job and bring the suit if nothing had happened? Why pay a fine to the FAA if you never did anything wrong?

Well, I guess only God above knows the whole truth.

HOUSTON (AP) -- Victoria Osteen, the wife of megachurch pastor Joel Osteen, says her faith never faltered after she was sued for allegedly assaulting a flight attendant over a spill on her first-class seat.
"If I had to go through this, I could at least be an example of trying to live out what's right, trying to stand strong and trying to just keep my faith intact," she said. "I stood strong because I believe in the truth."
Victoria Osteen said she never touched Continental Airlines flight attendant Sharon Brown and a jury on Thursday believed her, unanimously ruling that the co-pastor of Houston's Lakewood Church did not attack the airline employee.
After the jury's verdict, which came following nearly a weeklong trial, Victoria Osteen began to cry and hugged her attorneys and several supporters in the courtroom as she said "thank you God" and "praise God." The 12 jurors deliberated for about 2 1/2 hours.
Brown had testified Victoria Osteen got so upset when a spill on her first-class seat's armrest was not quickly cleaned up that she threw the flight attendant against a bathroom door and elbowed her in the left breast while attempting to rush into the cockpit.
But Victoria Osteen testified no such incident took place, as did her husband and other first-class passengers.
Brown quickly left the courtroom without talking to reporters, but in a brief statement her attorney Reginald McKamie read, she said, "We gave the truth to the jury. We are happy we had an opportunity to try our case."
She had been seeking at least $405,000 for actual damages - physical and mental pain as a result of an attack she alleged took place before the start of a December 2005 flight from Houston to Vail, Colo.
The jury's foreman, Gilles Labbe, said he and other jurors believed what happened on the plane was not an attack but a disagreement between a passenger and one or more flight attendants.
"This lawsuit in my opinion should not have been filed because nothing happened," he said.
Joel Osteen, whose church draws about 42,000 a week for services and whose TV show and books are popular around the world, said he and his family hold no ill will toward Brown and they have prayed for her.
"It's a great vindication and shows us the faithfulness of God," he said.
In his closing argument earlier Thursday, Rusty Hardin, Victoria Osteen's attorney, dismissed Brown's lawsuit as a made-up story concocted to land a courtroom payday.
In his closing argument, McKamie told jurors that because of her status as a religious leader, Victoria Osteen felt she had "favor from God." That led her to believe she was above reproach for humiliating and assaulting his client, he said.
Besides money for actual damages, Brown had requested punitive damages amounting to 10 percent of Victoria Osteen's net worth as part of her lawsuit.
But jurors only would have considered punitive damages if they had found that Victoria Osteen had assaulted Brown and had done so with malice. Victoria Osteen's net worth, which her attorneys declined to discuss, only would have been detailed in court if the trial had reached the punitive damages stage.
The Osteens paid a $3,000 fine the Federal Aviation Administration levied against Victoria Osteen for interfering with a crew member but testified they did that to put the incident behind them.
Posted by Sam at 6:13 AM