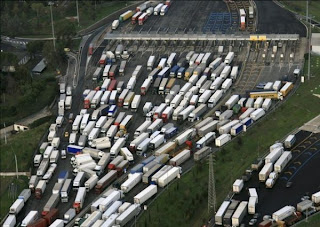 New documents cause delay in U.S. 281 tollway lawsuit
Patrick Driscoll - Express-News
A judge on Wednesday granted a 60-day delay on the U.S. 281 tollway lawsuit so federal officials can review recently discovered documents from a state environmental study.
The documents, called “a small addition” by the Texas Department of Transportation but “numerous” by U.S. District Judge Fred Biery, could alter the Federal Highway Administration's environmental clearance for the eight-mile toll road.
Toll critics and environmentalists filed the lawsuit in February to challenge the environmental study's thoroughness.
“TxDOT has discovered numerous documents containing potential evidence which, to its credit, says should be reviewed,” Biery said in a four-page order.
The Alamo Regional Mobility Authority, which took over the U.S. 281 toll project from TxDOT, promised not to start construction during the break, the order says.
Biery also noted that court battles take time. Thirty-plus years ago, the U.S. 281 project now known as McAllister Freeway was locked in litigation for 14 years and many contracts were delayed.
“The court presumes counsel and the parties will continue to use best efforts to proceed efficiently and professionally,” the order says. “Like good wine, the court will make no opinion before its time.”
The delay, effective Aug. 7, will end in October.
Posted by Sam at 6:19 AM