What next? The honeymoon police? 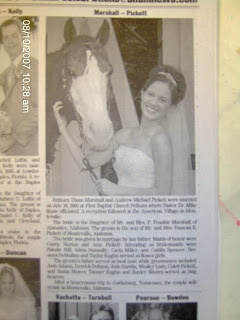 Oh come on! This seems a bit silly, eh?

Made a real horse's ass out of the groom.

Groom charged with being too near bride at wedding
BATAVIA, N.Y. (AP) - A New York state man has been arrested for getting too close to his bride on their wedding day. Police say Timothy Cole quarreled with a wedding guest at a party Friday after his wedding to his ex-wife in Batavia.
Officers knew the 45-year-old Cole from previous arrests and realized his bride had an order of protection against him. Cole was charged with first-degree criminal contempt, a felony, and ordered jailed without bail.
The Daily News in Batavia says Cole was convicted of criminal contempt on July 1.
The Genesee County public defender's office says Cole hasn't been assigned an attorney.
Posted by Sam at 7:42 AM