Show me the Honey!! 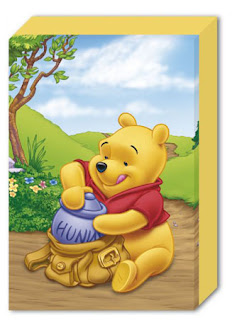 Okay so this reminded me of a really really bad joke I saw onscreen at a retaurant yesterday.

TOKYO (Reuters) - Japanese police have arrested a 20-year-old man who attacked and robbed two people after they stared at his Winnie-the-Pooh costume, officials said on Tuesday.

Masayuki Ishikawa was hanging out on a Tokyo street corner after midnight last month while wearing the cuddly costume, accompanied by two friends dressed as a mouse and a panther, when he took offence at being stared at, police said.

"It's uncommon to see people dressed up like this, so the victims were watching them. Then the perpetrator came up and said 'What are you staring at?'" a police spokesman said.

Ishikawa and his friends beat up the two victims and stole $160 from them, the spokesman said, adding the group had apparently donned the unusual garb because they had run out of clean clothes.
Posted by Sam at 7:36 AM