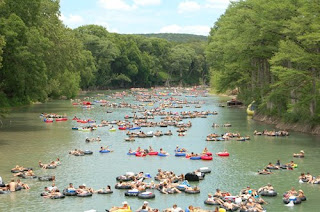 Maybe they wanted to go toobing and they had no way to get there?

Stolen pickup recovered from river
From staff reportsThe Herald-Zeitung
A truck reported stolen Monday morning from Schertz was recovered about an hour later, near a boat ramp under the Interstate 35 Guadalupe River Bridge. A passerby spotted the 1994 Chevy Silverado at about 9 a.m.

New Braunfels police spokesman Sgt. Mike Penshorn said.“It was just dumped there,” Penshorn said. Local fire and EMS crews arrived on-scene with police, he said, and “they had divers check the vehicle to make sure there wasn’t anybody in it.”

Other case details weren’t available Monday evening though local police, and a media spokesperson at the Schertz Police Department did not immediately return calls for comment.
Posted by Sam at 5:41 AM