Vote if you're a citizen 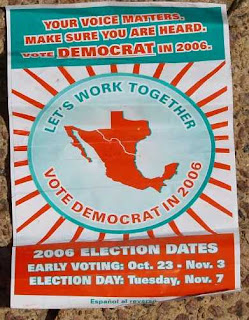 You live here legally and you are a citizen please vote.

You are not here legally and are not a citizen? Please do not vote.

I do not understand why it would be a "big deal" to issue voters ID cards, or require photo ID's for folks to vote.

Charges filed after voter fraud probe
By Guillermo X. Garcia - SAEN
Some 16 months after Bexar County District Attorney Susan Reed boldly declared that she wouldn't tolerate undocumented people “illegally voting in my county,” a lengthy voter fraud investigation has concluded with the filing of low-level charges.
The charges filed in late July against just two people, both U.S. citizens, were for perjury, a misdemeanor.
The investigation discovered more than 300 noncitizens had registered to vote in Bexar County, some as far back as the mid-1990s, and that 41 of them had actually cast a ballot.
But officials acknowledged that none will be prosecuted because the statue of limitations had expired.
Reed's white-collar crime unit and the Department of Homeland Security's Immigration and Customs Enforcement agency, ICE, jointly conducted the politically sensitive probe.
“You bet your bottom dollar we'll prosecute,” Reed said in kicking off the investigation in May 2007. “I will not have anyone illegally voting in my county.”
Cliff Herberg, Reed's first assistant, said Thursday that prosecutors tried to find and prosecute illegal voters. He defended the outcome of the probe, saying that for a variety of circumstances, including the time that had elapsed since the illegal acts occurred, prosecutors were unable to file voter fraud charges.
“We can't get around the (three-year) statute of limitations,” Herberg said. “But if we could have prosecuted, we would have, in an effort to maintain the integrity of the voting system.”
The investigation began after Bexar County Elections Administrator Jacquelyn Callanen purged hundreds of names from the county's roll of more than 860,000 registered voters.
In a review of the past six years, Callanen said 330 undocumented people had registered to vote, and that 41 of them had voted — even though they later acknowledged they were not U.S. citizens.
The 330 people had received jury duty summons cards because their names were culled from the county's voter registration rolls.
Callanen said 41 people admitted voting, some in multiple elections, between 2001 and 2007. Each one said they were unaware they could not register or vote.
It could not be determined when or how they registered, but Callanen said there was “nothing to indicate a systematic effort to register noncitizens. But clearly, those folks should not have voted.”
The headline-grabbing probe came amid a heated, partisan political debate stretching from Washington to Austin over legislation requiring voters to provide a photo ID before being allowed to cast their ballot. Currently, voters need only present their voter registration card.
Republican legislators in a number of states, including Texas, have tried repeatedly to toughen the law by requiring voters to present one or more forms of identification. They say it is necessary to preserve the integrity of elections.
Democrats generally oppose such ballot security measures — calling them a back door effort to disenfranchise the elderly and minorities, who traditionally vote Democratic and who tend not to carry multiple forms of identification with their picture.
In the last two legislative sessions in Austin, GOP-led efforts to pass voter ID bills have been met with resistance, bitter debate and defeat.
The district attorney's portion of the investigation quietly ended last month when two women were arrested and charged with perjury, a Class A misdemeanor, in connection with lying on a jury summons card.
The Hispanic women charged are citizens who apparently checked the “noncitizen box” on the jury card in an apparent effort to avoid jury duty, prosecutors said.
The joint probe involved federal agents along with two assistant district attorneys and a pair of investigators who determined that people illegally in the country had violated the state's election law.
Adrianna Biggs, head of the district attorney's white-collar crime unit who led the investigation, said authorities were unable to determine who registered the undocumented people to vote, many of whom had limited English proficiency and who appeared to be politically unsophisticated.
In at least two cases, the district attorney's office decided not to prosecute because of extenuating circumstances that would not “serve the interest of justice,” Herberg said.
He noted that Reed made a series of recommendations to Callanen that would tighten voter registration procedures and also make it easier to prosecute future instances of voter fraud.
But County Judge Nelson Wolff rejected those recommendations because “turning Jacqui Callanen into a law enforcement agent is not the goal. Enfranchising people and getting more people to participate in the electoral process is her goal.”
It is not clear when the federal portion of the probe will be wrapped up or if ICE plans to deport any of the people identified by the district attorney's office as being in the country illegally.
Posted by Sam at 6:00 AM