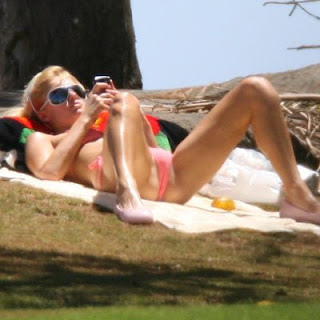 $75,000?
Heck, I bet she spends that much, or more, on a day of clothes shopping.
Jeeze Paris, pay them the 75 grand and save the legal costs.
Not legal advice on my part, well, unless you want to pay me.

Paris Hilton sued over lack of publicity for film

MIAMI (AP) - Paris Hilton didn't do enough pledging for a 2006 sorority comedy, according to a lawsuit filed Tuesday.
Worldwide Entertainment Group Inc. filed the lawsuit in U.S. District Court in Miami, alleging the 27-year-old model-actress-heiress owes $75,000 in damages for not fulfilling promotional obligations.
Hilton entered into an agreement in 2004 for the production and distribution of the movie "National Lampoon's Pledge This!," according to the lawsuit. Hilton starred in the film and received credit as an executive producer.
The Miami-based concern said it paid Hilton and her company, Paris Hilton Entertainment Inc., $1 million for "Hilton's acting services" and for "reasonable promotion and publicity" for the movie, which was released in 2006 and featured Hilton as the president of an exclusive sorority.
While most famous for her tabloid exploits and reality TV series "The Simple Life," Hilton has appeared in the films "Bottoms Up,""The Hottie & the Nottie" and "House of Wax."
She's slated to next appear in the movie musical "Repo! The Genetic Opera" and the tentatively titled MTV reality series "Paris Hilton's My New BFF."
Phone calls and e-mails to Hilton's manager, Jason Moore, were not immediately returned Tuesday.
Posted by Sam at 6:08 AM