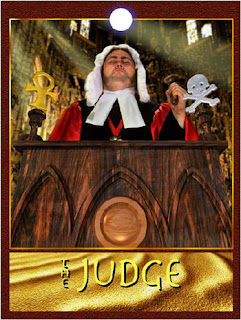 What goes on under those robes and in their minds?

Federal judge indicted on sex charges
Express-News -
HOUSTON — A federal judge accused of fondling a former court employee was indicted by a federal grand jury Thursday.
U.S. District Judge Samuel Kent is charged with two counts of abusive sexual contact and one count of attempted aggravated sexual abuse.
A former case manager at the U.S. District Court in Galveston accused Kent of twice touching her under her clothing and repeatedly making obscene suggestions during the six years she worked with him.
The indictment, first reported by the Houston Chronicle, alleges the criminal conduct happened on Aug. 29, 2003, and March 23, 2007, Acting Assistant Attorney General Matthew Friedrich said in a statement.
Kent's attorney, Dick DeGuerin, called any sexual contact that may have happened between Kent and his accuser consensual.
Posted by Sam at 6:02 AM