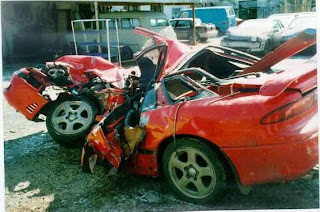 Why do folks do this? Unless of course they have warrants, drugs, were high or drunk, no insurance, are stupid......

Police hunting for motorist who fled

Police are searching for a driver they say fled after an early Sunday morning crash that left the passenger injured.
According to a police report, the driver, whose name is not being released by the Express-News because he has not been arrested or charged with a crime, was traveling at a “high rate of speed” in a black Mitsubishi Eclipse when he lost control and hit a guardrail on Interstate 35 at Stonewall Avenue south of downtown.
The driver is believed to have run west on Stonewall immediately after the 1:45 a.m. crash, the report said.
His passenger, 19-year-old Anthony Flores, had to be extricated from the car by emergency responders. He was taken to Wilford Hall Medical Center, where his injuries and condition were unknown Sunday evening.
Posted by Sam at 6:17 AM