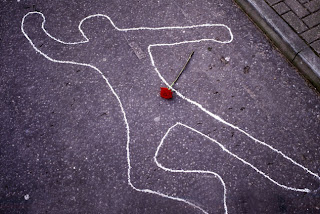 May God rest his soul. Our thoughts and prayers are with his wife and family.

DENVER -- A prosecutor for the Adams County District Attorney Office was shot to death outside his home in northwest Denver Wednesday night and the gunman is on the loose.
The victim was officially identified Thursday as 37-year-old Sean May.
He was shot around 6:20 p.m., in the 3300 block of West 36th Avenue. May was rushed to St. Anthony Central Hospital where he died.

The body was turned over to the Denver Coroner's Office, which will conduct an autopsy.
District Attorney Don Quick issued a statement that said, in part:
"May had been with the office for seven years and was responsible for the supervision and training of new deputy district attorneys. Sean was a talented prosecutor, a loving husband and a steadfast friend. Sean leaves a wife who is six months pregnant with their first child. We are all shocked and devastated by this terribly tragedy. Sean was a part of our office family and the loss is immeasurable. Our thoughts and prayers are with his wife and family.”
The gunman escaped and was being sought. He was described as a white or Hispanic man, in his late teens to early 20s. He is approximately 5 feet 11 inches tall. He has dark medium-length hair and a dark colored mustache and goatee. He was last seen wearing a black baseball style cap worn backwards, a white short sleeve T-shirt, khaki-colored knee-length cargo style shorts and unknown color tennis shoes.
Witnesses told police that the gunman fired several shots at the victim before running away.
Anyone with information about the shooting is asked to call 911 or Crime Stoppers at 720-913-7867.
May was the lead prosecutor who tried the Javier Vigil case in 2007. Vigil was racing another vehicle through a construction zone on Federal Boulevard near West 58th Avenue, when he hit and killed a construction worker. Vigil was convicted of criminally negligent homicide.
Last year, May prosecuted a Broomfield police officer accused of accidentally hitting his stepdaughter in the eye with a stun gun, blinding her. The officer was given probation.
A Sean May Memorial Account has been set up at Wells Fargo. Contributions can be made to any Wells Fargo in the country, according to the Adams County District Attorney's Office.
Posted by Sam at 3:21 PM