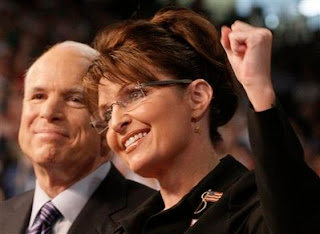 Sorry, I don't usually stray (too much) into the political arena but I am very pleased with Senator John McCain's pick of Governor Sarah Palin as his VP candidate. Now I can look at my daughters and truly say (as I always have) you can be anything you aspire to be.

Its about dang time.

The Palin Pick
By NRO Editors

By picking Alaska governor Sarah Palin as his running mate, John McCain has wowed the public and enthused the Right. He has reinforced some of his winning themes — that he has the mindset of an outsider and a fighter against corruption. He has also reinforced his appeal as the candidate more in touch with traditional values on moral issues.

None of McCain’s possible choices was perfect, and attention is being paid to the way that Palin undercuts other McCain themes, such as the importance of experience in foreign policy. Palin will have to reassure voters of her steadiness when she speaks at the Republican convention and when she debates Joe Biden. McCain, meanwhile, will have to carry most of the foreign-policy load himself and showcase his good health.

We hope that the choice of Palin also signals a decisive turn toward a campaign theme of fighting for the middle class. McCain and Palin can and should say that they will fight to protect Americans from our foreign enemies, to stop liberal excesses, and to reform dysfunctional institutions. They should not accept the portrait of middle-class Americans as hapless victims that so many of the Democratic speakers this week portrayed; but they need to show that they share middle-class frustrations. Strength in foreign policy; reforms of taxes and health care geared to the middle class; and a moderate social conservatism: It’s a potentially winning message, and now Republicans have a ticket that is suited to it.