At least he's not a stool pigeon 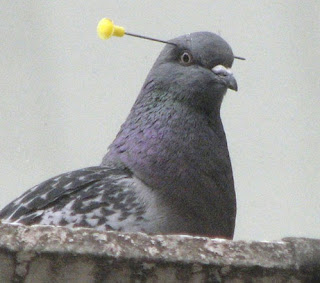 I've heard that there are a lot of pigeons in jail or prison, just not real ones.

Smuggler pigeon locked up
A pigeon's behind bars after being caught smuggling drugs into a high security jail in Bosnia.
The bird is a pet of one of the inmates and it's thought tiny bags containing heroin had been tied to its legs.
Wardens at Zenica prison grew suspicious when they noticed four prisoners becoming "visibly intoxicated" shortly after the pigeon was spotted landing on a window-ledge.
The bird's owner and three other inmates later tested positive for the drug.
"We suspect that the pigeon carried the drugs from Tuzla," said Deputy Warden Josip Pojavnik - referring to a town more than 40 miles away.
The bird has been taken into custody while an investigation is carried out.
"We do not know what to do with the pigeon," Pojavnik added. "But for the time being it will remain behind bars."
Officials are now deciding whether to suspend a rehabilitation programme at the jail that had been encouraging prisoners to breed pigeons - but they insist none of those birds were involved in the smuggling.
Posted by Sam at 8:11 AM