No Daisy Dukes in court 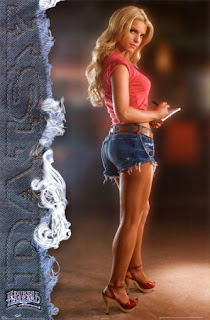 Judge, doesn't that seem a bit harsh? Even if you are holding her in contempt of court?

The drugs obviously made her forget

LANCASTER — A woman was ordered to serve three days in jail after a judge found her in contempt of court for inappropriate dress.

Kirstie Arnold, 28, of Lancaster, was sent to the Boyle County Jail after wearing short shorts during a court appearance Monday before Garrard District Judge Janet Booth.

Booth had warned Arnold about her clothes in two previous court appearances, and in the last appearance had fined Arnold $50 for her attire. A court videotape of Monday’s proceeding contains the following exchange:
“Why shouldn’t I put you in jail for contempt today?” Booth asked. “I told you twice.”
“I’m sorry,” Arnold said.
“No, you’re not,” Booth said. “I told you twice. I even fined you for being in contempt. Why shouldn’t I throw you in jail today? You apparently don’t care about the court’s orders.
“I forgot,” Arnold said.
“How could you forget?” Booth said. “No, seriously, how could you forget? It’s a complete disregard of court order. Complete. You should go to jail today, and you’re going.”
“Well, next time I won’t wear shorts,” Arnold said.
“I bet you won’t,” Booth said. And with that, Booth ordered her to serve three days of temporary detention “for disregard and disrespect for court proceedings.”

Arnold went to the Boyle County jail because the Lincoln County jail, which normally holds Garrard prisoners, had no room for her. She declined to be interviewed Thursday. Booth could not be reached immediately for comment.

Arnold would have been released Thursday except that she got into more trouble when she allegedly tried to conceal a drug from Lancaster Police Officer Allen Weston.
Court records say that Arnold moved Suboxone, a drug for treatment of opiate addiction, from her purse into her pocket.

The new charges against Arnold are in addition to pending charges of harassment, criminal trespass and leaving the scene of an accident. The last charge came after she allegedly knocked over a tombstone in a Lancaster cemetery with a vehicle and left, according to court records.
Arnold remained in the Boyle jail Thursday afternoon, but bond information was not available.
Arnold’s next court appearance is scheduled for Monday in Garrard District Court. If she is still an inmate at that time, she will wear a bright yellow jail uniform.
Posted by Sam at 10:26 PM