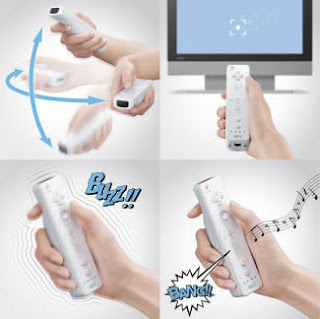 This is just so ironic.

Wii-injuries: Tendonitis from tennis, boxer's broken nose
Valdemar Tejada, Wagner High School - Special to the Express-News
It was Round 3 of a virtual slugfest.
Paige Peacock and her cousin Chris Peacock, juniors at Clemens High School, were at their grandparents' house playing the Nintendo Wii in the living room.
In the blue corner, Paige, 16, and in the red corner Chris, 15, were on the last round of an intense boxing match when — POW!
Paige whacked herself in the nose with the Wii-mote as she was bringing back her arm. After the swelling went down, she could see that her nose was a bit crooked.
She visited the doctor the next day and found out that her nose was broken.
Paige joined the increasing number of gamers who had been injured playing a video game that promotes fun and health. Since it hit the shelves in November 2006, the Nintendo Wii has been linked to injuries, aches and pains.
Last year, a Spanish doctor had a letter published in the New England Journal of Medicine about a diagnosis called “Wii-itis,” which is soreness of the shoulder from excessive hours of playing the Wii.
According to the letter, the treatment consists of ibuprofen for one week as well as complete abstinence from playing the game.
What some of those diagnosed might not know is that there is a warning label on every Wii console that says to take a timeout at certain stages of the game.
Dr. Kristen Kocurek, sports medicine director of the Texas MedClinic, said she has seen two patients over the past six months with Wii injuries, but they were not serious.
One was from Wii Bowling, where the patient twisted her knee during a fancy bowling move. The injury healed in two weeks.
The second injury was a patient who played Wii Tennis for an excessive amount of time and suffered tendonitis in the wrist. Tendonitis occurs from playing repetitively.
“I'm not a big fan of the Wii,” Kocurek said. “But it should be pretty good if it gets people off the couch and expends calories.”
The $250 video game system has a variety of games involving sports, such as boxing, tennis, golf, baseball, bowling and fishing. The point of the game is for it to feel realistic, as if the player were actually doing what is on the screen.
o
Posted by Sam at 5:55 AM