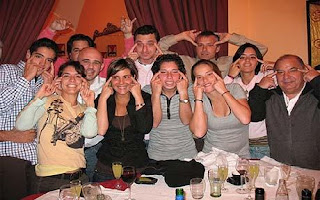 How offensive is this? Don't they have PC police in Spain?

Watch out or China will invade you.

The photo was discovered on the official website of the Spanish Tennis Federation
The latest photo to emerge shows Spanish women tennis players pulling the pose, apparently in anticipation of their Federation Cup match against China in April.
Pictures of the Spanish men’s and women’s basketball teams making the gesture, a crude impersonation of Chinese people, were published in adverts in Spanish newspapers earlier this week.
The photos, which were reprinted around the world, added to Spanish sport's poor reputation for racial sensitivity.
The latest image appears to show players in Spain’s Federation Cup team doing the “slit-eyed” gesture along with members of their support staff. There is no suggestion that they intended to cause offence.
It was apparently taken after the team defeated Italy in the quarter-finals of the competition - the leading team contest for women tennis players - in Febraury. Wine glasses are visible on the table in front of the party.
The Spanish team that defeated the Italians included Lourdes Dominguez-Lino, Nuria Llagostera Vives, Anabel Medina Garrigues and Carla Suarez-Navarro.
Llagostera Vives, Medina Garrigues and Suarez-Navarro are all competing at the Games in Beijing.
The photo is still visible on the official website of the Spanish Tennis Federation, where it was spotted. The original is captioned “Estamos preparados para China”, which translates as “We are prepared for China”.
Spain’s women tennis players defeated the Chinese team in their Federation Cup semi-final in April. The Spanish are due to play Russia in the final in September.
Posted by Sam at 6:19 AM