Why is this man smiling? 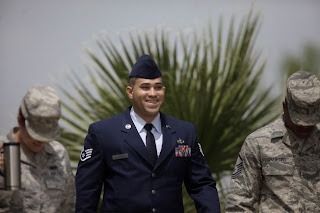 Staff Sgt. Peter Vega-Maldonado pleaded guilty to charges stemming from his relationship with a 21-year-old airman he supervised in basic training. He got a reduced sentence in a plea deal that requires him to testify against two other trainers.