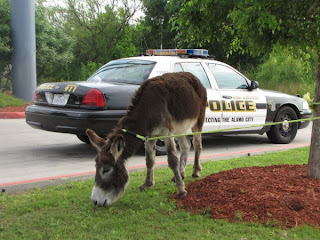 Burro-wing deep to bring you the news.

On Sunday morning, drivers on the Loop 410 access road near Roosevelt Avenue spotted a donkey wandering on the road. Several called police, including one who said the animal was either a donkey or a moose, officers said (perhaps the donkey was wearing his Easter Bunny ears that resembled moose horns?).

One motorist roped the donkey and led him to a tree at a nearby gas station and a woman who lived nearby brought the animal some oats.