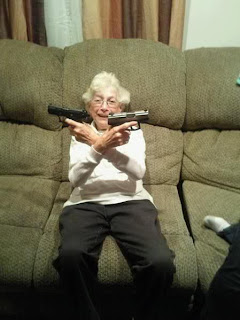 The Castle Doctrine is alive and well.

No word on whether the intruder is.

SAN ANTONIO- A man got a big surprise when he broke into one East side home on Thursday.

It happened around 1a.m. on Como street near East Commerce. Police say a man busted a door and got into the house only to be met by a 90-year-old woman holding a gun. She fired the gun once at the man, scaring him away. K-9 units were on the scene looking for the intruder.