Any redeeming qualities? ... Any? 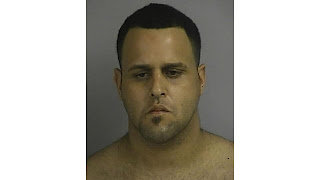 Throw the book at this thug!

A 90-year-old woman suffered several broken bones and road rash when she was dragged by a vehicle during a purse-snatching outside an Osceola County supermarket, authorities said.

Jose Luis Delgado-Pastrana, 27, of Kissimmee, was arrested on charges of robbery by sudden snatching, aggravated abuse of an elderly/disabled person, aggravated battery person 65 years or older and larceny.

According to the Osceola County Sheriff's Office, the woman left the Publix at  3343 South Orange Blossom Trail in Kissimmee around 8 p.m. and a man, later identified as Delgado-Pastrana, pulled up in a red Jeep Cherokee.