No stealing sodas at McDonald's! 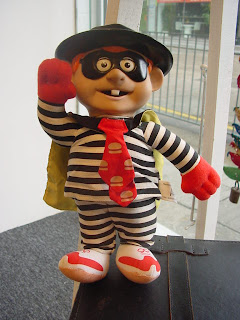 This will be one life-altering soda for him.

Too many prior misdemeanor theft convictions made this a felony theft.

NAPLES, Fla., April 22 (UPI) -- After leaving a Naples, Fla., McDonald's without paying for a cup of soda, Mark Abaire, 52, is in hot water, facing a felony theft charge, police say.

Abaire walked into the restaurant around 10 p.m. Thursday and asked the employee at the counter if he could have a cup for water. When he was given one, he went to the soda fountain and filled it with soda instead, then left to sit outside. A manager told police he asked Abaire to pay for the soda and he refused, and then remained on the premises after being asked to leave. He then cursed at the manager, prompting them to call the police.