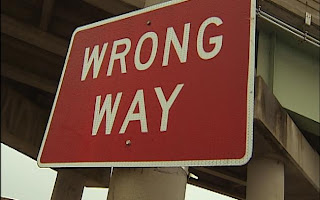 Another fellow who has ruined his career and life.

Was this the result of Fiesta?

A Bexar County corrections officer was arrested for drunk driving early Saturday, after he drove the wrong way on Loop 1604 and crashed into another car.

Police said the accident occurred near the intersection of Loop 1604 and Gold Canyon at around 4 a.m., when Bexar County Deputy Sheriff Trenton Wade was driving east in the westbound lanes of the freeway and hit a Ford Ranger.

Police say that the driver of the Ranger swerved to avoid Wade but was unable to dodge his Chevy Malibu. The impact caused the Ranger to roll over multiple times. Police say the driver sustained mild injuries. Officers described Wade as “highly intoxicated.”