The face of the problem 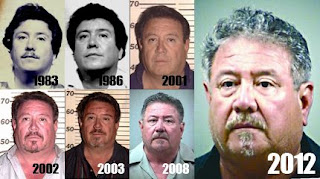 I would say he has a drinking problem.

One of the worst drunken driving offenders in Bexar County was deemed such a high risk after his 12th arrest recently that four high-tech devices keep tabs on him around the clock.

Carlos Faz also has to take a pill three times a week that makes him nauseous if he drinks alcohol. Even cologne can trigger a reaction.