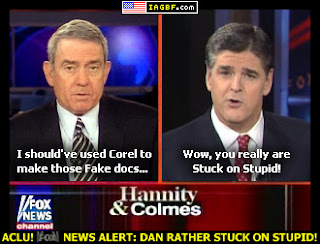 Nearly eight years after his fabled career at CBS News imploded like a death star over the notorious George W. Bush/Texas Air National Guard segment on 60 Minutes Wednesday, he can’t stop combing the debris for shards of vindication.

“I have a story to tell from my point of view,” he says about his new book, Rather Outspoken: My Life in the News, which roasts network management for its “spineless” behavior during the Bush episode; takes potshots at his successor in the CBS Evening News anchor chair, Katie Couric, as a purveyor of “News Lite”; and settles scores with former colleagues who, as he writes, “after pretending to be friends for all those years, stealthily snuck around giving anonymous newspaper quotes and otherwise scheming to put the dirk in deep when I was down and hurting.”