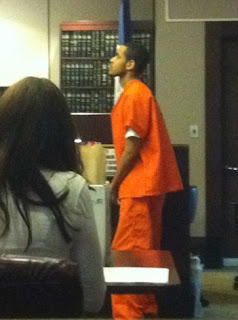 The actions he took that evening are not "normal" actions by anyone.

A San Antonio man was sentenced to 18 years in prison Thursday for opening fire outside a Northwest Side nightclub with a raucous reputation, standing by minutes later as his cousin fatally shot a fellow nightclub patron at a nearby gas station, then firing again at the victim as both parties drove away.

Qwame Rashade Fowler, 21, was initially charged with murder for the February 2010 shooting death of Tony Duncan, 27, at a Chevron station down the street from Club Antro. As part of a plea agreement reached last month, prosecutors allowed him to instead plead no contest to aggravated assault.

Co-defendant Stevie Washington, 20, who is believed to be the one who fired the fatal shots, was sentenced in September to 30 years in prison.