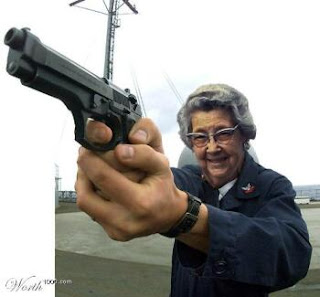 MACON, Ga. (CBS Atlanta/AP) – Authorities in Georgia say a grandmother foiled a robbery attempt by two armed men by getting into a shootout with them, injuring one man.

Police told The Telegraph that Lulu Campbell just dropped off her grandson at her daughter’s house early Saturday morning when someone demanded money outside her car, threatening to shoot her.

“(The suspect) shouted, ‘Give me the (blanking) money and open the (blanking) door!’” Campbell told The Telegraph, describing her ordeal. “I said, ‘Oh my God, somebody is going to rob me.’ I said, ‘Baby, you’re going to kill me anyway, so I don’t have to open it!’”