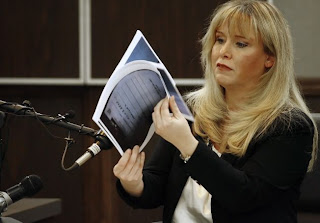 This could be problematic for the former prosecutor.

The Brady rule, named after a Supreme Court case, means the prosecution must release material which may be exculpatory in nature.  i.e. evidence which tends to show the defendant may not not have committed the offense or is otherwise somehow justified in taking the actions they did.

Eastwood, who didn't want to testify, is accused by defense lawyers of hiding crucial exculpatory evidence from them during the 2007 trial and also engaging in other misconduct.

These are among the grounds cited in an appeal by Overton to the Court of Criminal Appeals of Texas. The scientific evidence at her trial is also being called into question.