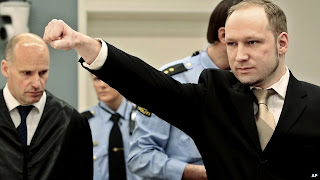 If found mentally sane and stable he faces a maximum 21 years in prison in Norway for murdering 77 folks.

Him or the Norwegian Justice System?


The man who carried out bomb and gun attacks in Norway last year which left 77 people dead has pleaded not guilty at the start of his trial in Oslo.

Anders Behring Breivik attacked a youth camp organised by the governing Labour party on the island of Utoeya, after setting off a car bomb in the capital.

He told the court he "acknowledged" the acts committed, but said he did not accept criminal responsibility.