A real ball-buster, she! 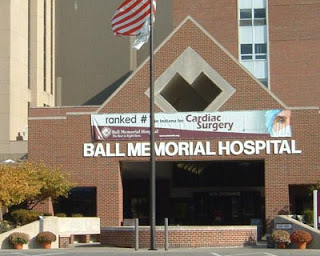 Okay, this is not a joke.

But he went to the emergency room at the Ball Memorial Hospital.

APRIL 5--An Indiana man had his scrotum severely torn when his “on-again, off-again” girlfriend entered his home and pummeled him in an attack that resulted in the woman’s arrest on several criminal charges, including two felonies.

Christina Reber, 43, was freed from jail yesterday after posting $10,000 bond in connection with her bust for the alleged attack last Friday at the Muncie house of her ex-beau (who told cops he had ended the couple’s eight-month relationship days before the assault).

The victim, 57, told police that he was working at his computer when Reber, pictured in the adjacent mug shot, “walked into his house uninvited,” according to a Muncie Police Department report that will make every guy wince. The man said Reber screamed at him to “call the fucking police” before launching her assault.