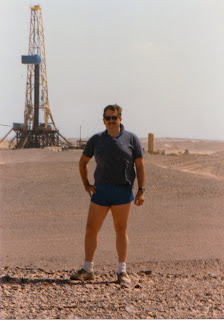 I used to work for them as a geologist.

Picture of me after a run while drilling a well in the Eastern Desert of Egypt about 60 Km north of Hurghada, Egypt, by the Red Sea.  Circa 1986.

That’s from Marathon’s fact book, which it sent recently to interested parties.

Marathon said it holds 300,000 acres in the Eagle Ford, making it one of the Top 5 leaseholders in the shale. The company said it’s focused on drilling in Atascosa, DeWitt, Gonzales, Karnes and Wilson counties.

The company has 17 rigs in the Eagle Ford Shale now and will add another by June.
Posted by Sam at 8:22 AM