Don't ever cross a bear; they'll get pissed!! 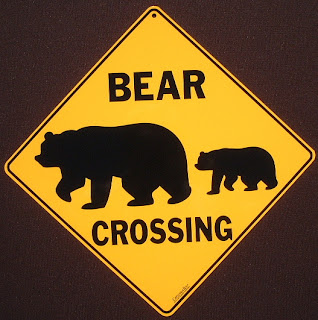 Back in the Fall when I went to visit my daughter at school in Vermont I drove up from the airport Manchester, New Hampshire.

I'll never forget the sight of the warning sign on the highway as I approached her school near the Vermont Capital.

I guess they weren't kidding.


MONTPELIER, Vt. (AP) — A late-night encounter with four bears trying to snack from backyard birdfeeders gave Vermont's governor a lesson in what not to do in bear country.

One of the bears chased Peter Shumlin and nearly caught the governor while he was trying to shoo the animals away, he said Friday.

"I had a close encounter with a bear, four bears to be exact," Shumlin said.