Ammo for the Drug Wars? 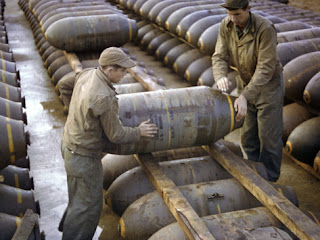 That's enough for quite a few fire fights ain't it?

Mexican agents have seized more than 250,000 rounds of assault rifle ammunition from a U.S. 18-wheeler in Ciudad Juárez, KSAT-TV is reporting.

The driver, who is from the Dallas area, was detained after Tuesday’s discovery, the station adds. The driver said he had no goods to declare when he arrived at the border.

The trucker’s employer said he’d made a wrong turn and couldn’t turn the vehicle around at the bridge, so he continued into Mexico, KSAT reports. Coming back into the U.S., Mexican officials said they had to inspect the vehicle.