Turn her over she's done now 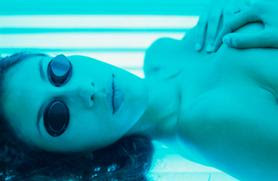 Poor thing; may she rest in peace.

I haven't ever understood the need for folks to tan.

Authorities in the Dallas area are investigating the death of a woman whose body was found Sunday in a tanning bed.


Investigators said they were called to a residence in the 5700 block of Terrace Trail (in the municipality of Sansom Park) at 12:17 a.m. A man told police he returned home to find his girlfriend, identified as 46-year-old Rhonda Waits, on the tanning bed and unresponsive.

Authorities told the station there were no signs of trauma. The Tarrant County medical examiner has not ruled on a cause of death.
Posted by Sam at 7:38 AM