And why is this man smirking? 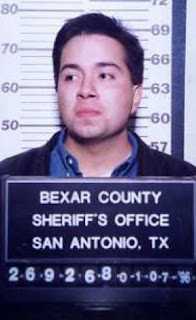 Are they telling jokes in the jail?

A former VIA bus operator has been indicted on a manslaughter charge more than a year after the bus he was driving ran a red light and crashed into a car, killing its driver.

Jessie Gutierrez, 38, was booked into Bexar County Jail early Thursday but was released on $20,000 bail.

The charge against Gutierrez was filed after an investigation by the San Antonio Police Department and then the Bexar County district attorney's office.