Pigs at the trough 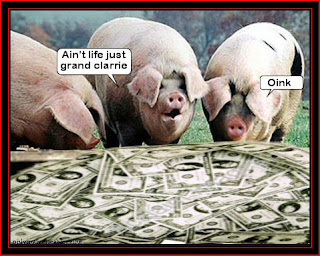 I'm thinking these folks ought to be slammed for this act of theft.

They're already being fed from the public trough but apparently that wasn't enough for them.


Mayor Vincent C. Gray’s administration has fired 61 city employees for collecting unemployment benefits while working for the District government, city officials said Tuesday.
The city’s Department of Employment Services, which oversees the jobless-compensation program, said in February that dozens of current and former city workers had received the fraudulent payments.
The checks ranged from a few hundred dollars to more than $20,000 per employee since 2009 — or about $800,000 in all — according to city officials. The city suspended 92 employees, among them the 61 who have been recently terminated.
The rest of the story:
Posted by Sam at 8:25 AM