Will sanctions of some sort be assessed? 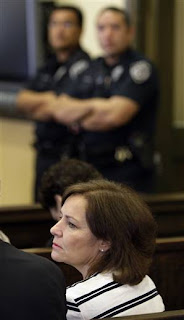 The special prosecutors are continuing the hunt for sanctions of some sort against Judge Sharon Keller.

I believe they might disregard Judge Berchelmann's findings and levy a sanction.

I do not believe she will, as some want, be removed from her position.

By Peggy Fikac - Express-News
AUSTIN — Texas Court of Criminal Appeals Presiding Judge Sharon Keller should suffer consequences for her conduct in a death row inmate's failed effort to file a last-minute appeal, special prosecutors in the case against her contended Wednesday.

“This is not a case as to whether the death penalty should or should not be administered. This is a case, however, concerning whether a judge should allow herself to disregard at will a long-standing established protocol of her court that is designed to safeguard proper handling of all time-sensitive communications on an execution day,” said the filing, which objected to a special master's earlier conclusions in the case.

The Commission on Judicial Conduct accused Keller of discrediting the judiciary after death row inmate Michael Wayne Richard was unable to file an appeal after the court clerk's closing time on the day of his execution, Sept. 25, 2007. Keller said the clerk's office wouldn't stay open past 5 p.m.