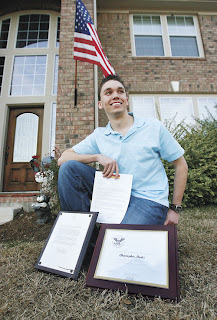 What an uplifting story.

Well done Chris you are an inspiration to us all.


'I decided to lend a hand'
Eric J. Weilbacher  - The Herald-Zeitung

Christopher Martz was not supposed to make it. That is what his doctors said, at least, after a tragic car crash that flung him, his sisters and his father from their SUV more than six years ago, while the family traveled through the Nevada desert on their way home to Sacramento from a vacation in Salt Lake City.

His sisters were injured, his father died and Chris Martz suffered a broken arm and lesions on his skull, resulting in traumatic brain injury that left him in the hospital for six months to recover.

“I was airlifted by a hospital jet out of the middle of nowhere to Reno,” Martz said. “The brain damage was really severe.”

In fact, many doctors considered the brain damage he endured irreparable. Through rehabilitation, he had to relearn everything — speaking, reading, writing and walking.

“The Ronald McDonald House helped me remain stable during recovery,” he said, by keeping his family close by his side.

“I’m known as the million dollar man now because of the amount of money that went into my treatment,” he said.

That was more than six years ago. Now Martz, 17, a New Braunfels resident, has been recognized as one of ten finalists for the Prudential Spirit of Community Awards. He received a Presidential Letter of Achievement for logging more than 500 hours of community service this past year, all going toward a toy drive he set up while a freshman in high school four years ago. That toy drive, in its fourth year, collected more than 2,700 toys, gifts and supplies in 2009. Volunteers in the toy drive also made Christmas dinners for families staying at the Ronald McDonald Houses in San Antonio.

After being discharged from the medical center in Reno, Martz family went back to Sacramento to find a medical community skeptical that his mind could fully recover and return to normal. They needed a fresh start.

So they moved to San Antonio, and found a group of neurologists — including Dr. Tomasavich out of the Stone Oak Medical Center — who believed in his recovery, helping him recover to full mental capacity.

“It’s funny, I used to be a math whiz, I was doing high school level math in the fifth grade, but after the accident I struggle with math and science,” Martz said.

“It was less than 500 yards away. It was really bleak and dark, so I decided to lend a hand,” Martz said.

His efforts that first year were small, recruiting a few volunteers from his high school and help from ReMax Realty where his mother, Leslee Martz, is employed.

“Always make sure your mom is on board, because she is half the work force,” he said.

Over the intervening years, Martz has built a relative toy-drive empire, with about 200 volunteers a year, from his high school and from groups in New Braunfels where he and his family now live, such as Independence Title, All Star Elite Cheer, Gruene Kountry 4-H, New Braunfels Girl Scouts, Office Max, Schoebel’s Restaurant, Walgreens on Walnut Avenue and Loop 337 in New Braunfels.

Wal-Mart’s headquarters also donates to Martz’s toy drive, and in 2009 shipped in 72 lbs. worth of toys and towels.

“These things may seem tedious,” Martz said of the dinners and toys, “but a meal or Christmas presents are the last thing you need to think of when your child is in the hospital.”
Posted by Sam at 6:51 AM