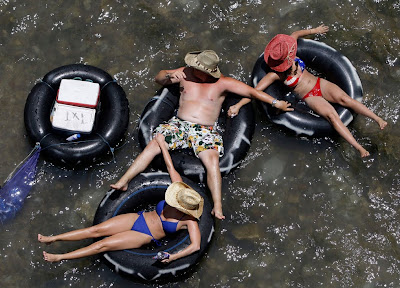 The ordinances apparently are still in effect for the upcoming tubing season.

This is NOT a legal opinion. I am NOT rendering legal advice.  Do not rely on it.

An appellate court in Austin upheld some of the city of New Braunfels’ liquor laws this past week, including bans on both beer bongs and Jell-O shots on local rivers.

A group of outfitters and former New Braunfels Mayor Stoney Williams formed the group “Stop The Ordinances Please” in 2007, and fought in district court to have a number of the city’s alcohol-related ordinances passed in 2006 and ’07 ruled as invalid.

The local district court ruled in June of 2007 that the city could enforce those laws, and that the outfitters had no standing. STOP subsequently filed an appeal with the Third District Court of Appeals in July of 2007.

That ruling was finally handed down Friday, with the appellate court upholding most, but not all, of the district court’s earlier findings.

The court of appeals agreed that the city could implement bans on volume drinking devices, Jell-O shots less than five ounces and alcohol in 17 parks and city-owned properties. It also agreed with restrictions requiring no more than one cooler per tuber on the river.

“I had a feeling that was going to be their ruling,” said Williams, who was involved in the suit after he purposely floated the river with an oversized cooler to see if the city would enforce its new ordinance. He was ticketed and said he later received deferred adjudication. “But it still goes back to the same issue of people in charge wanting bigger government and making up ridiculous rules.”

Outfitters could, however, still try to get some money back.

The court also ruled that the four outfitters involved in the suit — Texas Tubes, Corner Tubes, Rockin’ R’ River Rides and Gruene Home Run Batting Cages & Tubing — could challenge the cooler size ordinance. The court ruled that the outfitters had standing because they had purchased large coolers that could no longer be rented out to tubers.

“Now, if the outfitters chose to pursue it, we would have to determine how much those coolers are worth,” said City Attorney Alan Wayland. “But I think it was a good ruling for the city overall, since they could have potentially agreed with all of (the outfitters) claims.”

In addition, the court ruled that the outfitters could continue to fight whether the city can enforce its laws at all on the Comal and Guadalupe rivers, which are state-owned waterways.

“The kid floating down the river from Houston owns just as much of that river as the people who live on it,” Williams said.

“I think ultimately they’re going to find that the city can regulate the rivers,” he said, “but that’s up to a judge to decide at this point.”

Those two issues could now be back into district court for a final decision, if the outfitters choose to pursue further litigation.

Representatives from the individual outfitters could not be reached for comment Tuesday.
Posted by Sam at 6:55 AM