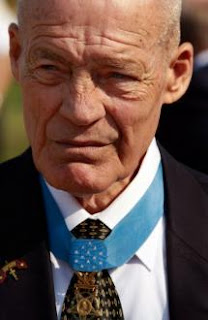 You may stand down now Colonel you have earned a grateful nation's thanks.

A true hero is laid to rest.

By Gary Martin - Express-News
WASHINGTON — Col. Robert L. Howard, an Army veteran from San Antonio and one of the Vietnam war's most highly decorated soldiers, was laid to rest Monday at Arlington National Cemetery as friends and family looked on.

A survivor of five tours in Vietnam, he received the Medal of Honor for directing a counterattack when 250 enemy troops almost overwhelmed his platoon in December 1968 when he was a sergeant first class in the U.S. Army Special Forces.

Wounded by grenades and unable to walk, he continued to command and was the last to board a helicopter that took his troops out of harm's way.