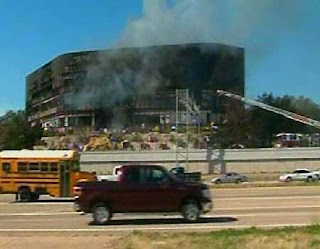 This is exactly what an already over-heated political landscape didn't need.

An apparently intentional act directed at the IRS which will, excuse the unintentional pun, only fuel the flames of DHS saying that this "man-caused disaster" was promulgated by a right-wing nutjob.

Or was it a left-wing nutjob?  Or perhaps a citizen fed up with the system he thought was screwing him over?

Officials are investigating whether a small plane that crashed into an office building in Austin, Texas, Thursday morning was an intentional act, an NTSB official told Fox News.

An NTSB spokesman, however, told FoxNews.com that "we can't confirm any of that."

Authorities said they have identified the pilot as Joseph Andrew Stack, a 53-year-old software engineer who lived in Texas.

The FAA said a Piper Cherokee took off from an airport in Georgetown, Texas, at 9:40 a.m. and crashed into the building in Austin shortly thereafter. Officials are investigating whether Stack, 53, owned the plane or stole it.