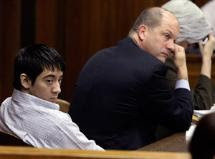 You know I, of course, feel badly for the Barios family but I also feel bad for the Estrada family too.

This has got to be a nightmare for both families.

I do not feel badly for Joe Estrada, Jr. however, who was found guilty of capital murder and whose fate awaits final determination by the jury.


Estrada's family says he burglarized them

By Craig Kapitan - Express-News
VICTORIA — Joe Estrada Jr.'s cousin told jurors Monday he began to fear for his safety in 2008, after his family's home was burglarized and an epithet was left for him in shaving cream on a bathroom mirror.

“Right around my senior year, when I changed my hairstyle and my friends started calling me ‘Jose Elite,' he (Estrada) changed his (MySpace) profile name to ‘Elite,'” said Jose Ruiz, 20, as testimony in the punishment phase of Estrada's trial resumed. “I guess it upset him that he couldn't totally be me.”

Estrada, 20, was convicted of capital murder last week in the April 24, 2008, death of San Antonio restaurateur Viola Barrios. Jurors in Victoria County, where the trial was moved because of intense media coverage in San Antonio, are now hearing evidence to determine if Estrada should be given the death penalty.