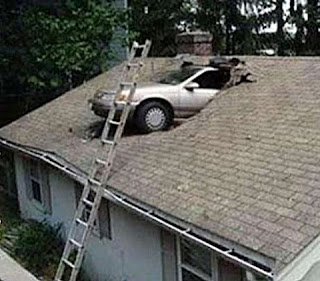 No comment other than this is NOT a photo from the incident.

I have no idea as to how that car got up there.

Police, CPS adjusting charges for man in SUV
By Bryan Shettig - The Herald-Zeitung

Police and Child Protective Services are reworking their charges for a man who police say crashed his truck into a neighbor’s house and then ran away, leaving his 7-year-old behind.

Police have not arrested the man yet and were working Child Protective Services to determine a full range of charges, Police Lt. Mike Penshorn said previously.

Investigator’s met with the Comal County District Attorney’s office Wednesday but charges were not finalized, Penshorn said. It is unclear whether the man faces felony or misdemeanor charges.

Investigators will present final charges again to the DA’s office in the next week or so, Penshorn said, just in time for the March 3 round of Grand Jury indictments.

The 32-year-old man, who police have not identified yet, is accused of crashing his 1996 Chevrolet Tahoe into a neighbor’s duplex Feb. 9 while the neighbor was on her couch which the SUV brushed. Neighbors could not give the man’s name, and his wife declined to comment or provide her or her husband’s name.

Police say the man was driving around the cul-de-sac of his neighborhood in the 100 block of Morales Court, when police he let his 7-year-old son sit on his lap to drive the vehicle and crashed into a home.
Posted by Sam at 7:15 AM