The punishment phase of the trial starts today, I believe. 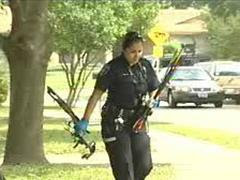 I still believe the death penalty will be assessed.  A lot will depend on what the defense does in the way of mitigating evidence of course.

Estrada's mother hurried out of the courtroom after the verdict was read and could be heard wailing loudly from the women's bathroom. Afterward, her family and defense attorneys tried to calm her.

Estrada showed no reaction when the verdict was read, but appeared stressed as he heard his mother cry.