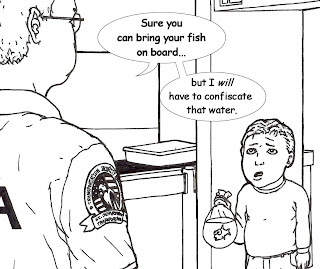 OK this is just ridiculous.

I appreciate what they have to do, but please use some common sense.

Just when I thought I was out of the Transportation Security Administration business for a few columns, they pull me back in.

Did you hear about the Camden cop whose disabled son wasn't allowed to pass through airport security unless he took off his leg braces?

Unfortunately, it's no joke. This happened to Bob Thomas, a 53-year-old officer in Camden's emergency crime suppression team, who was flying to Orlando in March with his wife, Leona, and their son, Ryan.
Ryan was taking his first flight, to Walt Disney World, for his fourth birthday.

The boy is developmentally delayed, one of the effects of being born 16 weeks prematurely. His ankles are malformed and his legs have low muscle tone. In March he was just starting to walk.

Mid-morning on March 19, his parents wheeled his stroller to the TSA security point, a couple of hours before their Southwest Airlines flight was to depart.

The boy's father broke down the stroller and put it on the conveyor belt as Leona Thomas walked Ryan through the metal detector.

The alarm went off.

The screener told them to take off the boy's braces.

The Thomases were dumbfounded. "I told them he can't walk without them on his own," Bob Thomas said.
"He said, 'He'll need to take them off.' "

Ryan's mother offered to walk him through the detector after they removed the braces, which are custom-made of metal and hardened plastic.

No, the screener replied. The boy had to walk on his own.

They complied, and Leona went first, followed by Ryan, followed by Bob, so the boy wouldn't be hurt if he fell. Ryan made it through.

By then, Bob Thomas was furious. He demanded to see a supervisor. The supervisor asked what was wrong.
"I told him, 'This is overkill. He's 4 years old. I don't think he's a terrorist.' "

The supervisor replied, "You know why we're doing this," Thomas said.

Thomas said he told the supervisor he was going to file a report, and at that point the man turned and walked away.

A Philadelphia police officer approached and asked what the problem was. Thomas said he identified himself and said he was a Camden officer. The Philadelphia officer suggested he calm down and enjoy his vacation.

Back home in Glassboro a week later, Bob Thomas called the airport manager and left her what he calls a terse message.

He was still angry enough last week to call me after I'd written a couple of columns about travelers' complaints of mistreatment by screeners at the airport.

"This was just stupid," he told me.

At the very least, it was not standard procedure.

On Friday, TSA spokeswoman Ann Davis said the boy never should have been told to remove his braces.
TSA policy should have allowed the parents to help the boy to a private screening area where he could have been swabbed for traces of explosive materials.

She said she wished Thomas had reported the matter to TSA immediately. "If screening is not properly done, we need to go back to that officer and offer retraining so it's corrected."

Davis also said TSA's security director at the airport, Bob Ellis, called Thomas last week to apologize. He gave Thomas the name of the agency's customer service representative, in case he has a problem at the airport in the future.

Afterward, Thomas said he appreciated Ellis' call. He said he had no interest in pursuing the matter further or in filing a lawsuit.

"I'm just looking for things to be done right," he said. "And I just want to make sure this isn't done to anyone else. Just abide by your standard operating procedures."
Posted by Sam at 8:09 AM