"To serve and protect" 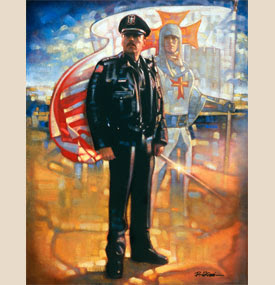 To serve and protect, a simple phrase really.

However, it means so much when situations like this occur and men like Russell Koehler answer its call.

He is a hero, plain and simple.


Deputy is honored for saving life
SEGUIN — What would you do if you saw a head-on collision happen right before your eyes and one of the cars involved burst into flames?

“He saw a car cross the center stripes, hit another car and then burst into flames,” said Seguin Fire Chief Scott MyCue, who came to Commissioner’s Court Tuesday to present Koehler with a plaque for heroism above and beyond the call of duty. The fire was an uncommonly bad one for a modern vehicle, MyCue said.

Authorities knew exactly what Koehler saw and what he did, because it was all captured on his patrol car’s video camera.

Initially, the man driving was trapped inside, but he struggled out through the driver’s side window and fell to the ground right beside the vehicle — still not out of harm’s way and unable to move further.

In spite of the fire and the danger it posed, Koehler rushed to the car and dragged the victim away from the vehicle, which by then had its entire undercarriage and trunk area — where the gas tank is — burning.

That isn’t exactly the way a fireman might approach the situation, MyCue noted. For one thing, the firefighter would have the means available to beat back the flames, and would have protective gear to keep himself from being burned.

Koehler had no time to think about any of that.

“It was startling to see something like that happen,” Koehler said, after thanking MyCue for the award and commissioners for their recognition.

Sheriff Arnold Zwicke thanked commissioners, MyCue and the fire department for recognizing Koehler and praised the officer for a job well done.

“If you saw it on the video, it happened quickly, but Cpl. Koehler was able to take control of the situation and save a man’s life,” Zwicke said.

County Judge Mike Wiggins spent a 30-year career as a Department of Public Safety trooper — the last half of it as Seguin’s DPS sergeant.

“Too many times, when an officer responds when something like this happens, it goes without any recognition at all or with very little recognition. There’s nothing that ever made me more proud when I was a sergeant than when a trooper who worked for me went above and beyond the call of duty and received similar recognition,” Wiggins said. “It’s a reflection of Sheriff Zwicke’s department that we had a man in a time of crisis and stress who could lean on his training and do what he had to do and saved a life.”

Zwicke agreed that Koehler had reflected well on the department he’s worked at since 2006.

“When you look at the video, he should be credited for getting that person away from that vehicle and saving his life,” Zwicke said.
Posted by Sam at 6:26 AM