So, I must really mean it when I say I'm bored to death? 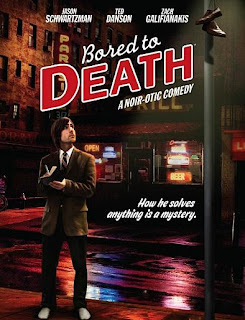 Stop reading this column if I am boring you.


You really can be bored to death, scientists discover
By Jonathan Petre
www.dailymail.co.uk


Boredom could be shaving years off your life, scientists have found.

Researchers say that people who complain of boredom are more likely to die young, and that those who experienced 'high levels' of tedium are more than two-and-a-half times as likely to die from heart disease or stroke than those satisfied with their lot.

More than 7,000 civil servants were studied over 25 years - and those who said they were bored were nearly 40 per cent more likely to have died by the end of study than those who did not.

The scientists said this could be a result of those unhappy with their lives turning to such unhealthy habits as smoking or drinking, which would cut their life expectancy.

Specialists from the Department of Epidemiology and Public Health at University College London, looked at data from 7,524 civil servants aged between 35 and 55 who were interviewed between 1985 and 1988 about their levels of boredom. They then found out whether they had died by April last year.

Researcher Martin Shipley, who co-wrote the report to be published in the International Journal of Epidemiology this week, said: 'The findings on heart disease show there was sufficient evidence to say there is a link with boredom.

'It is important that people who have dull jobs find outside interests to keep boredom at bay, rather than turn to drinking or smoking.'

Psychologist Graham Price added: 'It is important to distinguish between cause and effect. Are these people turning to drink and drugs because they are bored or because they have certain characteristics?

'For many people who are unmotivated or uninspired by life, or maybe have a tendency towards depression, the way out of it is to change their focus away from themselves and on to other people.

'From being all me, me, me, they should be thinking, what can I do for my family, my friends, my colleagues, even my boss.'

The original survey found that one in ten civil servants had been bored within the past month, with women more than twice as likely than men to suffer. Younger employees and those with more menial jobs were also found to be more prone to boredom.

Those who reported feeling a great deal of boredom were 37 per cent more likely to have died by the end of the study.